A Variable stores a numeric value to be used at play time. Variables can be used for accumulating player scores in a game, tracking player money and transactions, remembering properties of objects in a simulation deck, or can just be used as conveniently editable parameters which you can tweak later.

Variables have a name, such as $score. 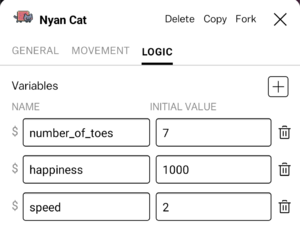 The actor variables section of a blueprint

To edit actor-local variables, open the Inspector for the actor's Blueprint, and navigate to the Logic tab. 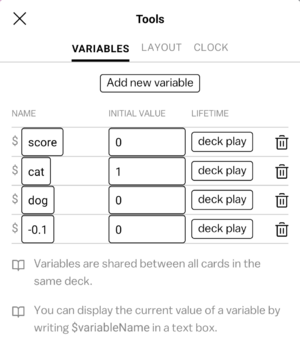 The global variables tab of the Tools panel

Deck variables, also sometimes referred to as global variables, are variables that are shared among all actors across all Cards in the Deck. One common use for deck variables is to keep track of the player's overall score.

To edit deck variables, press the Gear button at the top of the editor to open the Settings sheet, then navigate to the Variables tab.

Deck variables that have deck play lifetime will remember their values within a single deck play. If the player exits the deck and comes back (e.g. by swiping away or restarting the app), the variables reset to their initial value.

Note that when a player moves between different Cards in the same deck play, the variables preserve their values. Changing or restarting cards does not reset deck variables.

As the name suggests, each player gets their own value for persistent variables. They are not shared among players.

Displaying the value of variables

Inside any Text, you can write the variable name (including the $) to display the value of the variable when the deck is played. For example: "Your score is $score".